The Commonwealth Transportation Board (CTB), supported by the Office of Intermodal Planning and Investment (OIPI), the Virginia Department of Transportation (VDOT), and the Department of Rail and Public Transportation (DRPT), will study Interstate 95 (I-95) to initiate a data-driven study to develop the I-95 Corridor Plan which will (i) identify key problem areas along the corridor, and (ii) identify potential solutions and areas for additional review and study.

As directed in Senate Joint Resolution 276 and House Joint Resolution 581 during the 2019 General Assembly, the study team will identify targeted improvements and incident management strategies for the corridor.

The Commonwealth Transportation Board (CTB) will receive briefings during the study time frame.

You are invited to the final series of meetings, which will be focused on reviewing results of the study’s findings, which include development of a corridor-wide operations and arterial roadway upgrade plan for implementation. Locations requiring additional study have also been identified. The meetings will include a brief presentation followed by an open house, which will allow attendees to speak one-on-one with study team members.Feedback provided by members of communities, industries, and other stakeholders are being considered as team members finalize the study and prepare a draft plan. The CTB plans to report the study’s findings to the General Assembly during the 2020 General Assembly session.

Public meetings will be held at the below-listed dates and times at the noted locations. 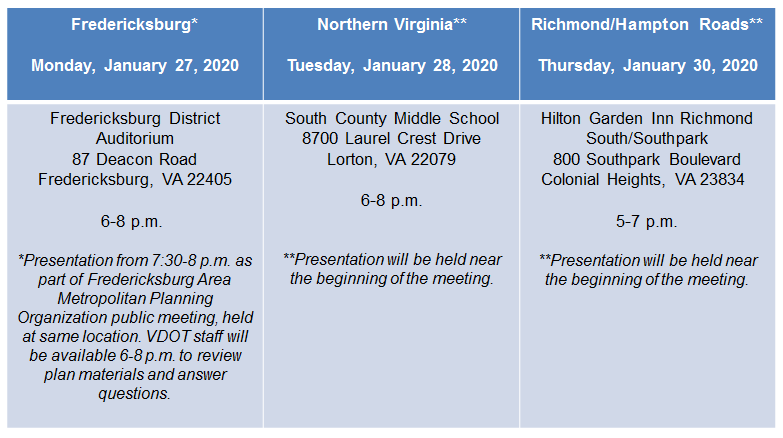 Any questions or comments can be submitted via email to: VA95corridorplan@vdot.virginia.gov.

Prior to full finalization of the Interstate 95 Corridor Improvement Plan, the study team will also conduct a study of Interstate 64 in the summer of 2020. Once complete, the study team will present a listing of prioritized capital projects for both interstate corridors to the CTB for its consideration in determining potential allocations from available funding sources. Following the prioritization, the Interim I-95 Corridor Improvement Plan will be finalized and presented to the CTB for action.

Review the below materials specific to the locations that affect you.